Home › Uncategorized › The Early History of Freemasonry in Indiana

The Early History of Freemasonry in Indiana

In 1956 the General Grand Chapter of Royal Arch Masons published A History of Royal Arch Masonry. Robert A. Woods who was a member of Prince Lodge #231 contributed a chapter in this book outlining not only the history of Royal Arch Masonry, but Blue Lodge Masonry back to its very beginning in the Indiana territory. Many of those first Indiana Freemasons were also the first great leaders of Indiana, and I have excerpted some of the great information that Robert A. Woods originally wrote for the 1956 book, and will certainly reference it again in future writings.

Freemasonry came to Indiana, mainly, by way of the South Gate. All but one of the nine lodges instrumental in forming the (Indiana) grand lodge were creatures of the Grand Lodge of Kentucky.  No sooner had Virginia planted the good seed in Kentucky in 1800, than the latter crossed the Ohio river into Indiana. To Vincennes, the Capital of Indiana territory, went the second dispensation for a lodge of Freemasons (the first went to Kaskaskia, IL) ever issued in the Northwest Territory, which, at that time, comprised the States of Indiana, Illinois, Michigan, Wisconsin, and the eastern part of Minnesota. This was in 1807. Then followed dispensations for lodges at Madison, Charlestown, Salem, Lawrenceburg, and Corydon.

We are not drawing upon the imagination when we declare that Freemasonry came into this section of the Northwest Territory hand in hand with the first influential pioneers and territorial officials, or that Freemasons took an important part and leadership in the early struggle for the establishment of good government in the then remote, and wilderness-like, Ohio and Wabash Valleys of Southern Indiana…

The first person raised a Master Mason in Vincennes Lodge (and the Indiana Territory) was Colonel John Gibson, a Fellowcraft belonging to a lodge in Lancaster, PA, which conference occurred the day following the constitution of the Lodge (March 14, 1809). Three Days later, March 17th, 1809, Vincennes lodge initiated four persons: William Prince, Parmenus Beckes, John D. Hay, Hezekiah Bradley, the first two of whom, Prince and Beckes, were passed and raised to the degree of Master Mason that same day. These two, therefore, were the first persons in Indiana territory to petition for, and receive, all the degrees in Freemasonry, while Gibson Was the first person, a Fellowcraft, to receive the Master Mason Degree.

Colonel John Gibson was not only the first man to be Raised to the Sublime Degree of a Master Mason in the Indiana Territory, but he is also the namesake of Gibson County. Princeton, Indiana is the county seat of Gibson County, and was named for William Prince. Our next blog post will shed more light about William Prince, whose contributions to the Indiana Territory, and State of Indiana can hardly be rivaled. 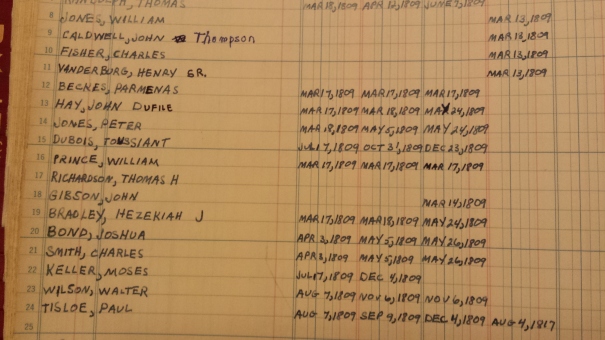